What’s Going On in the Otway Basin?

OCEAN’s main objective is to stop new gas in the Otway Basin.

But what gas? What’s actually going on out there?

It turns out this question is not an easy one to answer!

Trawling through the publications of dozens of energy companies, government agencies and newspapers has only brought us some of the way to answering all of our questions. So far, here’s what we’ve got.

What is the Otway Basin? The Otway Basin is a rift basin which extends into parts of Victoria, South Australia and Tasmanian waters. It is about 80% offshore, covering roughly 155,000 square kilometers. It has been an important exploration region for the Australian gas industry for more than a century, with both onshore and offshore gas fields.

Most of the developed gas fields are located off Port Campbell. They are shown below in red on this map from the Department of Industry, Science, Energy and Resources website. Most of the offshore gas fields are connected via pipelines which run from the gas wells to the region’s two gas distribution centres.

How long have we been drilling for gas in the Otway Basin?

The Otway Basin isn’t exactly new to drilling. According to Geoscience Australia, exploratory drilling in the region dates as far back as 1892.

Wells were first drilled in the Victorian area of the basin in the 1920s, and the region has been explored and mined since then, becoming increasingly industrialised especially between 1999 and 2005 in alignment with the changing gas market and technological developments. Today, acreage is released periodically by the government for gas and petroleum exploration in the Otway Basin.

How is gas extracted?

Gas is extracted from the offshore gas reserves  through various methods, including extended reach drilling and offshore drilling.

Extended reach drilling involves extracting gas from submerged gas fields near the shore. This is done in State-controlled waters which extend 3 nautical miles from the shoreline. It involves drilling from the land, underneath the sea floor at a depth of up to 2700m. 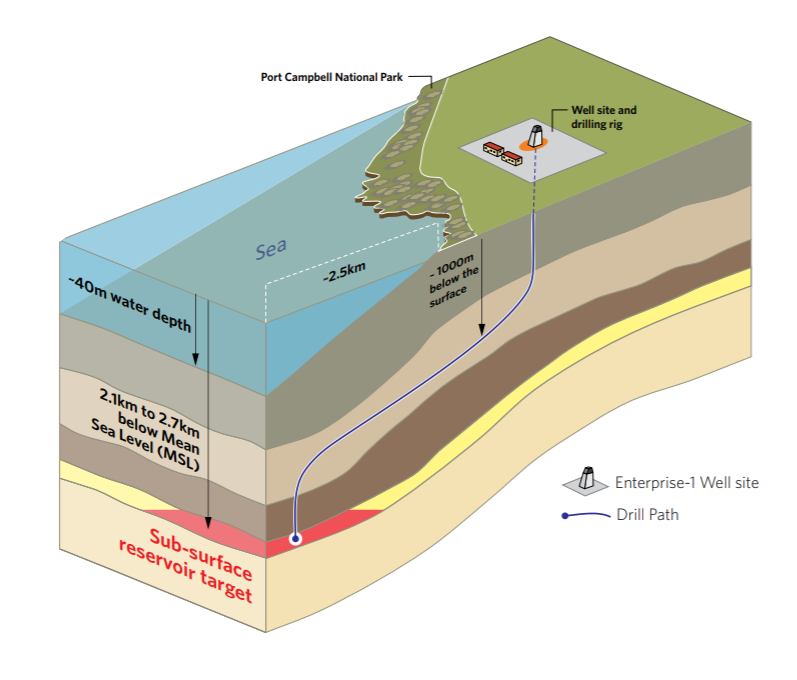 Offshore drilling is generally done in Commonwealth-controlled waters; gas companies use a semi-submersible drill rig which is towed to site and anchored in place before it is used to drill through the sea bed. After drilling is suspended or abandoned, the casing from the drill rig is left in the sea floor.

Who are the major players in the extraction of gas in the Otway Basin?

This is one of the trickiest questions to answer, with the gas market constantly changing and new projects frequently being announced by different combinations of different energy companies. These companies include, but are not limited to, Beach, BHP, Woodside, Santos, AWE, Mitsui, Origin, Cooper, Benaris and CalEnergy.

Is the government on board with this?

The state government regularly releases acreage within the Otway Basin for gas and petroleum exploration.

This year, the Andrews Labor government lifted the moratorium on onshore conventional gas exploration, allowing onshore gas drilling to begin in the Otway region in July 2021.

The Federal Government is also pushing for a gas-driven COVID recovery, with plans to subsidise costs for gas companies, relax Australian standards for gas infrastructure and fast-track the environmental approval process.

How is gas exploration regulated?

Offshore gas exploration and extraction is regulated by the National Offshore Petroleum Safety and Environmental Management Authority, or NOPSEMA. They are an independent energy regulator, assessing all energy projects in Australian waters against their set of standards.

Why do we want to stop gas in the Otway Basin?

Gas in the Otway Basin, although largely invisible to us, affects many parts of our community.

Fast-tracking the environmental and safety standards in the gas industry may increase the risk of catastrophic gas blowouts. 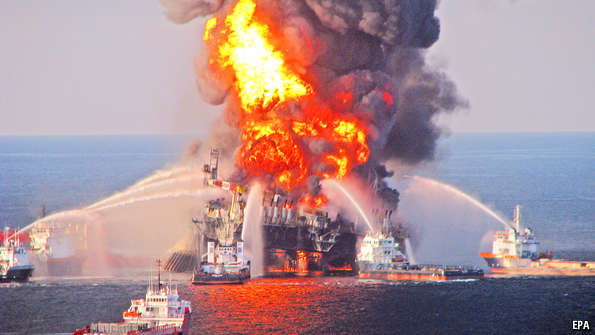 An example of how catastrophic a blowout can be is the Deepwater Horizon blowout in the Gulf of Mexico in 2010. The explosion killed 11 people and caused the largest marine oil spill in history. The semi-submersible drill being used at the time was akin to the drills used offshore in the Otway Basin. The consequences of a blowout like this only kilometers from the Great Ocean Road would be devastating not only for the marine ecosystem, but the tourism industry which forms the backbone of our local economy. Image sourced from The Economist.

The Australian gas system is convoluted and wasteful, meaning that despite us already being the world's largest producer of natural gas, we still pay top dollar for it due to the government’s long-standing trade agreements with overseas markets.

Extracting natural gas increases the risk of gas leaking into the atmosphere. Methane, the main component of natural gas, is as much as 84 times more damaging to the atmosphere than carbon dioxide, the product of burning natural gas. So, whether burned or not, greenhouse gases will be extracted, and contribute to global warming.

Needless to say, global warming needs to stop.
A study published in the Nature journal states that half of the remaining gas deposits in the world must not be burnt in order to avoid more than a 50% chance of a 2 percent increase in global temperature.
In 2017, the Victorian government committed to net zero emissions by 2050. To achieve this from our current standpoint, overall emissions must be brought down and no new sources of emissions should be tapped.

Please contact us if you have any further knowledge, corrections or understanding of the gas industry. We are always on the lookout for new information and new perspectives on this issue.

For Otway Climate Emergency Action Network, contact us to get involved and see more here.